The Random Scourge of Violence

Such uses of the term “scourge” have a good precedent in the Church. Pope John Paul II used it in his encyclical Evangelium Vitae in his plea for an end to all violence: “Today this proclamation is especially pressing because of the extraordinary increase and gravity of threats to the life of individuals and peoples, especially where life is weak and defenceless. In addition to the ancient scourges of poverty, hunger, endemic diseases, violence and war, new threats are emerging on an alarmingly vast scale” (EV 3).

As if to buttress and expand his predecessor’s appeal, Pope Benedict XVI himself used the word in his 2007 Easter Urbi et Orbi address: “How many wounds, how much suffering there is in the world!... I am thinking of the scourge of hunger, of incurable diseases, of terrorism and kidnapping of people, of the thousand faces of violence which some people attempt to justify in the name of religion, of contempt for life, of the violation of human rights and the exploitation of persons.”

But what exactly does “scourge” mean, especially when used in these ways?

Technically, a scourge is a whip that was utilized in the ancient world for punishment and torture. Most scourges had numerous lashes, and frequently each lash had a knot or some hard article attached to its end. As a result, scourging generally resulted in the literal flailing of a victim’s back, with each lash catching and then ripping away chunks of flesh.

The most famous scourging in history is the one Jesus endured—an event we recall and contemplate every time we pray the Sorrowful Mysteries of the Rosary. This violent humiliation of our Lord at the hands of his captors is recorded in all four Gospels, and yet it is passed over as if it were but a prelude to the execution that was to follow. Nevertheless, it was unquestionably an excruciating ordeal, as every stroke of the whip brought new injury and introduced new pain to random areas of the Lord’s body.

And it’s this randomness of the scourge’s assault that makes it a particularly apt metaphor for both war and abortion, for both strike down human life without regard to identity or threat. This is absolutely true in the case of abortion—a reality Pope John Paul emphasized in his encyclical:

The moral gravity of procured abortion is apparent in all its truth if we recognize that we are dealing with murder and, in particular, when we consider the specific elements involved. The one eliminated is a human being at the very beginning of life. No one more absolutely innocent could be imagined. In no way could this human being ever be considered an aggressor, much less an unjust aggressor! He or she is weak, defenceless, even to the point of lacking that minimal form of defence consisting in the poignant power of a newborn baby's cries and tears (EV58).

The anonymity and complete vulnerability of abortion’s primary victim highlights the act’s utter irrationality. The baby—a gift from God and an icon of hope, no matter what the trying circumstances of her conception—is destroyed as if it were a rabid animal or a knife-wielding attacker.

The insanity of modern warfare and terrorism is equally unnerving, particularly with regards to the comparable anonymity and vulnerability of its youngest victims. Consider the sons and daughters of our own courageous soldiers who will be orphaned as the result of war’s random violence. Consider, too, the sons and daughters of countless combatants and innocent civilians who will be left similarly stranded when parents are caught in the line of fire. Not to be forgotten are the high number of fatalities among the young themselves when the tides of violence sweep into war-torn areas, engulfing entire communities and often for no strategic purpose. 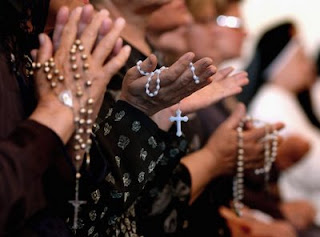 Too easily do we dismiss such killings as “collateral damage” and “the cost of war.” Every human being is a child of God, created in His own image and extravagantly loved by Him. If a country’s efforts to secure its own interests and safety cause it to relativize the inestimable worth of human life, then that country is engaged in a morally dubious enterprise at best—a reprehensible and evil offense at worst. An army that heedlessly slaughters innocent children in the course of pursuing military objectives cannot possibly be fulfilling the will of God, no matter what justifications are offered. The Catechism, quoting Vatican II, puts it this way:

The Church and human reason both assert the permanent validity of the moral law during armed conflict. “The mere fact that war has regrettably broken out does not mean that everything becomes licit between the warring parties.” Non-combatants, wounded soldiers, and prisoners must be respected and treated humanely. Actions deliberately contrary to the law of nations and to its universal principles are crimes, as are the orders that command such actions (CCC 2312-13).

The scourge—universally feared in the ancient world, widely embraced in the modern world via the Culture of Death. Next time we meditate on the Scourging at the Pillar, let’s remember in a special way the victims of random violence throughout the world. Let’s pray, too, for an end to all war, especially the war on the unborn.
_____________________________________


A version of this story appeared in Sign of Peace, Catholic Peace Fellowship.
Posted by Rick Becker at 3:16 PM