St. Fidelis and the Cathedral of the Plains 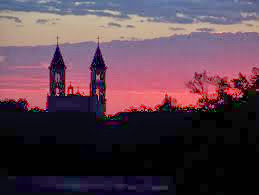 The stretch of I-70 across Kansas can be a challenge to the sleep deprived, but about halfway across the state there’s a jewel awaiting those who make the trip: The “Cathedral of the Plains.”

When I visited it the first time, I thought I’d enjoy a brief respite at a simple country church. I was wrong on two counts: There’s nothing simple about the Cathedral of the Plains, and my short respite turned into a prolonged prayerful pause—almost a roadside retreat.

The “cathedral” is actually St. Fidelis Church, a parish served by Capuchin Franciscans in the small town of Victoria (pop. 1,231 at last count). Victoria started as an English and Scottish settlement named for the queen back in the late 1800s, but Russian immigrant farmers of German descent took it over, bringing with them their devout Catholic faith and a passion for rich liturgical worship.

The faithful constructed a series of churches culminating in an unprecedented communal project: a church to rival the magnificent edifices the farmers had left behind in Europe. Urged on by their Capuchin pastor, every Catholic from the surrounding area contributed. They quarried limestone several miles south and transported it to the site by wagon. Workmen used hand tools to cut and shape the stones, and elaborate rope-and-pulley systems to set them in place.

The worksite was a constant hive of activity, and the busy farmers helped out between planting, harvesting, and chores. When completed in 1911 after three years’ work, St. Fidelis Church was one of the largest churches west of the Mississippi—220 feet long, with twin towers topping out at 141 feet each. The enormous Romanesque structure acquired its “Cathedral of the Plains” moniker from the U.S. statesman William Jennings Bryan after he visited it in 1912. And just recently, the church acquired another, more prestigious honor when it was designated a minor basilica by the Vatican. 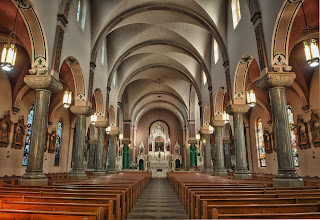 And why St. Fidelis? Fidelis was the 17th-century Capuchin itinerant preacher who implored the Calvinist citizenry of Austria to return to the true faith. He was killed, of course, and therein lies the hook that captured the imaginations of the Kansas transplants. Just as St. Fidelis had surrendered all to make Christ known, the people of Victoria had truly invested their lives in erecting their monument of faith.

And it isn’t just a monument, but also a sign of the Body of Christ—like all church buildings. Like the Church herself. “Through him the whole structure is held together and grows into a temple sacred in the Lord,” St. Paul writes to the Ephesians, of the whole Church. “In him you also are being built together into a dwelling place of God in the Spirit” (2.21-22).

Which is why some churches have feast days: They really do point us to Jesus. The Franciscan Cathedral of the Plains is no exception.

A version of this story was originally published in Franciscan Way, Franciscan University of Steubenville.
Posted by Rick Becker at 9:47 AM