“The days in which we live now require heroic Catholicism, not casual Catholicism,” declared Peoria Bishop Daniel Jenky in 2012. “We can no longer be Catholics by accident, but instead be Catholics by conviction.” This is especially the case when religious tolerance is lacking and when faithfulness to Christ can – and often does – lead to death, a situation not restricted to our current age.

Consider, for example, the persecuted Christians of the Islamic Ottoman Empire. In 1856, following the Crimean War, the Ottoman Sultan granted full and universal religious freedom to his subjects. It was an unacceptable concession for the majority Muslim population, and it was particularly noxious in the view of the minority Druze sect, a gnostic offshoot of Shiite Islam.

In the spring of 1860, the Druze, egged on by recalcitrant Ottoman authorities, began methodically slaughtering Lebanon’s Maronite Christians. By early July, the violence had spilled over into Muslim-controlled Damascus, leading to thousands more Maronite deaths. 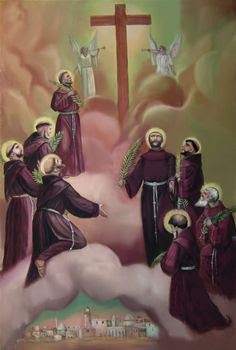 At the time, a small cadre of European Franciscans – six priests, two lay brothers, hailing from Spain and Austria – were ministering to the resident Christian population in Damascus. Led by the Fr. Emmanuel Ruiz, the missionary friars administered the sacraments, operated a small school, and did their best to tend their small flock.

When news of the Islamist uprising reached their convent, the Franciscans gave shelter to the Maronite locals, and Ruiz himself sought to consume the reserved Blessed Sacrament before it could be profaned. When the assailants arrived and confronted Ruiz in the chapel, they offered to spare his life if he converted to Islam. “I am a Christian,” came the guardian’s reply, “and I will die a Christian.” The attackers immediately cut down Ruiz and then butchered his body.

A similar fate awaited the rest of the Franciscan contingent, who all steadfastly refused to renounce the faith and accepted martyrdom readily. This heroic resolve even extended to members of their flock – specifically, three Maronite laymen, all blood brothers, who, like their Franciscan shepherds, preferred death to disloyalty to Christ.

In 1926, Pope Pius XI beatified Ruiz, his seven confreres, and the three martyred Maronite laymen. May their intercession lead to greater interfaith peace and tolerance, for, in the words of Pope St. John Paul II, “the church remains always open to dialogue and cooperation.”
_______________________________

A version of this essay originally appeared in Franciscan Way, Franciscan University of Steubenville.
Posted by Rick Becker at 8:49 AM