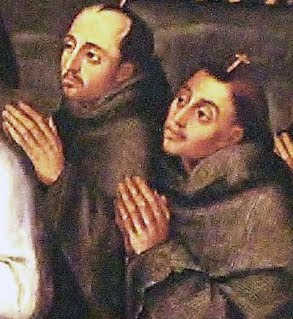 The dramatic saga of John of Cetina and Peter de Dueñas can be summarized in a single line: “Franciscans of Spain,” writes hagiographer Basil Watkins, “they were sent to the Muslim kingdom of Granada in order to try and evangelize the inhabitants and were predictably killed.”

As you’d expect, there’s more to this story.

Born in 1340, John had a privileged childhood, but he gravitated to obscurity and penitence. In time he made his way to the Franciscans of Aragon, where he made his profession and was ordained. Although a popular preacher, John longed for solitude, and he retired to a cave in Valencia to take up an eremitical life.

Word of heroic Franciscan martyrdoms in the Holy Land reached Father John, and he committed himself to missionary work among the Moors, despite his solitary inclinations and the risks. John received permission to visit the Muslims of southern Spain in 1396, and he prepared for his journey.

At the time, Franciscan missionaries always traveled in pairs, and Father John chose Brother Peter to be his companion. Peter was around 19 years old and just starting out in his religious vocation. Nonetheless, he was eager to join Father John, and he rebuffed objections to his participation in such a dangerous undertaking.

It wasn’t long after the two arrived in Granada before they were arrested and hauled before the Sultan. Offered the choice between conversion to Islam and death, the two readily accepted the latter. The Sultan promptly complied, beheading them both by his own hand.

Pope Clement XII beatified the pair in 1731. The promulgation of their exploits likely spurred the missionary aspirations of another Spanish Franciscan, young Junípero Serra, who would eventually become the Apostle of California.

A shorter version of this reflection originally appeared in Franciscan Magazine, Franciscan University of Steubenville.
Posted by Rick Becker at 1:38 PM