We don’t usually associate rock star status with sanctity, but there are exceptions – like Pope St. John Paul II, for instance, and Blessed Teresa of Calcutta. Both routinely attracted hordes of fans, and many of those groupies turned their lives around after their derivative brush with saintly fame. 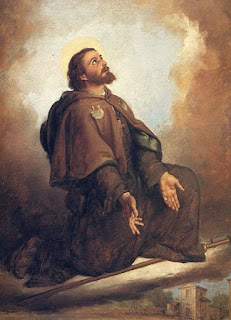 Even hype is redeemable.

St. Amato Ronconi also generated a lot of publicity in his day, some of it good, some of it not so good – including money, fame, sex, and power, just like a real rock star! A son of privilege in the northern Italian region of Saludecio, Amato had a cushy start, but he lost his parents at an early age. The orphaned Amato moved in with his older brother, Giacomo, and took on the duties of a farmhand.

Giacomo’s wife, Lansberga, wanted Amato to marry her younger sister – mainly to keep the family estate intact – but Amato had other plans. Undoubtedly influenced by St. Francis of Assisi’s example (a saintly rock star himself and only recently deceased) and contacts with a neighboring Franciscan monastery, Amato ardently desired a celibate life given over to prayer and charity. He joined the Franciscan Third Order and adopted a penitential lifestyle augmented by extravagant generosity to the poor.

Lansberga complained that her young brother-in-law must be crazy, and she insisted Giacomo do something before Amato literally gave away the farm. To keep the peace, Giacomo divided the family estate and gave Amato his own piece of property – which the saint converted into a hospice for the indigent, the sick, and the many pilgrims on their way to Rome. Amato turned no one away, and when supplies ran out, he’d produce food seemingly out of thin air.

The pilgrim visitors spread stories about Amato’s wonder-working far afield, and it’s no surprise that the curious began flocking to Saludecio to gawk. The saint sought relief by becoming a pilgrim himself, making the Camino de Santiago to Spain on four separate occasions. Those trips capture the humility of St. Amato so well that depictions of him invariably include a pilgrim’s staff and the distinctive Camino scallop badge. 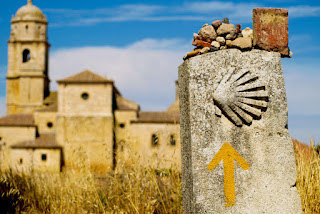 Amato’s sister-in-law, however, was not so impressed by her other-worldly relation, and she sought revenge for her thwarted schemes. She knew that Amato was particularly close to his sister, Chiara, who had herself adopted a Franciscan way of life in imitation of him. Lansberga started a slanderous rumor throughout the community that Amato and Chiara were having incestuous relations. When a city official investigated, a miraculous sign not only convinced him that the siblings were innocent, but that Amato himself was a saint.

On a fifth Camino attempt, an angel appeared to Amato and urged him to head back. Understanding this as a mortal premonition, he set his affairs in order and deeded his property to the Benedictines so that they could continue his apostolate to the poor. This they did for hundreds of years, and today a home for the elderly continues to operate on the same site.

Amato died on May 8, 1292, and Pope Francis declared him a saint on November 23, 2014 – the Feast of Christ the King. “Jesus has opened to us his kingdom,” the Holy Father declared at the canonization, but “his kingdom begins now – by being close in concrete ways to our brothers and sisters who ask for bread, clothing, acceptance, solidarity.”

A version of this story appeared in Franciscan Way, Franciscan University of Steubenville.
Posted by Rick Becker at 12:13 PM