King Henry VIII's presumptuous rebellion against the pope brought out the worst – and the best – in the Catholic Church in England. Some Catholics turned traitor to the Church of their birth, while in others, the flame of faith shone more brightly. John Forest, who lived his whole life on fire for God, stood as a beacon of truth in that dark time.

A teenager when he entered the Greenwich Franciscans, Forest went to Oxford for advanced theological studies and earned honors as a doctor of theology. With his intelligence matched by natural leadership and rooted in a profoundly Franciscan vision of humble service to Christ, John was an easy pick for the post of provincial.

Despite his peace-loving Franciscan temperament, John's fiery side flared up when it came to defending the Church. As provincial, he once cursed 19 fellow friars for resisting a visit from papal legate Cardinal Thomas Wolsey – a reprimand based less on religious hospitality than on respect for the pope in his representatives, no matter how disagreeable their persons.

The good friar's reputation for wisdom and sanctity eventually spread beyond his religious community, and the queen herself, Catherine of Aragon, asked Father Forest to become her confessor and spiritual advisor. Catherine greatly benefited from the Franciscan's plainspoken direction, and she later referred to herself as Father Forest's "obedient daughter."

The king, too, took a great interest in religion. Henry VIII vigorously opposed the Protestant revolt spreading everywhere on the continent and even acquired the title "Defender of the Faith" in recognition of his efforts. Nevertheless, when Henry made up his mind to divorce Catherine to marry Anne Boleyn, he disregarded papal objections and declared his own rebellion against Rome in 1533.

Immediately, Henry set about consolidating power and obliterating dissent. Father Forest's entire order, publicly unified in their rejection of the king's aberrant assertions, was suppressed in 1534, and the learned priest thrown in jail. An accomplished theologian, virtuous priest, and royal confessor, Forest was just the type of popular figure Henry sought to win over – or, short of that, eliminate.

Prison did nothing to weaken Forest's opposition to Henry's new church. The priest actually yearned for martyrdom. Commenting on his advancing years, Forest wrote, "At such a period of life as this, a man easily perceives that people can do without him; consequently I am most earnest in my prayer that I may be dissolved to be with Christ."

Four years into his confinement, Forest still managed to stir up fresh sparks of controversy. The theologian composed a polemic that boldly refuted the king's claims and upheld the pope's universal authority. When the work became known, Henry ordered John Forest to be burned at the stake.

Trumped up charges and mock trials followed, along with pressures to recant in exchange for freedom. Forest remained steadfast. "Gentlemen," he told his accusers, "with this body of mine deal as you wish!" 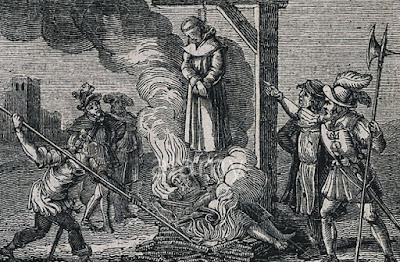 The government took Forest at his word and consigned him to the executioners on May 22, 1538. Blessed John made it clear in his final statement that no manner of torture or threat or sophistry or calumny could turn him from his "old sect of this Bishop of Rome."

The king's men chained the priest to a stake. On top of the usual logs and kindling they added a large wooden statue of St. Derfel Gadarn. St. Derfel was an obscure sixth-century Welsh soldier turned monk who had acquired an impassioned following over the centuries. The statue, an object of no little Catholic devotion, had been sent to London for disposal.

An old Welsh saying predicted that this statue would one day "set a forest ablaze." The prophecy proved true enough as the famed carving of the Welsh warrior-monk fueled the pyre of John Forest, the friar who had become a warrior.

A version of this essay was originally published in Franciscan Way, Franciscan University of Steubenville.
Posted by Rick Becker at 5:02 PM