The Once and Future Franciscan 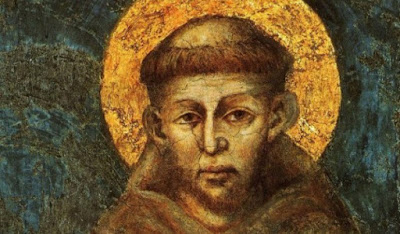 Francis and I go way back, but I’m just now getting to know him.

When I joined the Church 30 years ago, a Catholic co-worker gave me a St. Francis medal along with a prayer card – “Lord, make me an instrument of your peace….” I’m afraid I lost track of that medal, but the prayer, representative of the Franciscan tradition, is tattooed on my consciousness. It’s my thanksgiving and renewal of self-dedication whenever I receive Holy Communion, and since daily Mass has been my habit since becoming a Catholic, I’ve probably said the Peace Prayer thousands of times – in fact, I know I’ve said it thousands of times. Similarly, the life of St. Francis and his legacy have long informed my ongoing efforts to live the Faith, and I even ended up studying theology at a Franciscan University.

Clearly, then, a Franciscan stream of inspiration has been important in my life, but there was another that came first. My sponsor when I became a Catholic was a man deeply influenced and formed by the Benedictine tradition. Jim's love for St. Benedict naturally rubbed off on me, and I’ve always gravitated to monastic traditions of prayer and spirituality. In fact, in keeping with the centrality of the Divine Office to Benedictine life, I learned to pray Lauds and Vespers before I ever learned to pray the Rosary.

Both influences, Benedictine and Franciscan, relate to the reason I went to Chicago in the first place: Dorothy Day and the Catholic Worker movement she helped to establish. Like my sponsor (himself a former Catholic Worker), Dorothy embraced Benedictine spirituality, and in time became a Benedictine Oblate – the monastic equivalent of Franciscan Tertiary. The Worker movement itself, however, was especially identified with St. Francis of Assisi, particularly in terms of his devotion to Lady Poverty, to peacemaking, and to celebrating God’s creation.

In my case, that Benedictine/Franciscan overlap is finally reaching an equilibrium as I pursue Franciscan Third Order formation. Since my Catholic conversion, I’ve maintained my love of things monastic, but I’ve never been in the right place or frame of mind long enough to associate myself with a monastery or enter an Oblate’s formation program. And since coming to the South Bend/Mishawaka area 20 years ago, I’ve developed a great affection for the Sisters of St. Francis on “The Mount” – for their apostolate of prayer along with their work in education and healthcare – yet it never occurred to me that they might become my spiritual home. 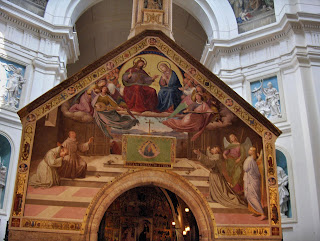 Prompted by my confessor, I finally contacted Sr. Agnes Marie, the community's liaison to the Secular Franciscan Fraternity, and I’ve begun my first Franciscan baby steps – but still carrying a Benedictine torch. In a formation session recently, Sr. Agnes Marie, said something that made everything click just right. She’d been relating some of the controversies surrounding Thomas of Celano’s hagiographical writings about St. Francis, and how those works might not have survived if the Benedictines hadn’t preserved them. I remembered, too, that the Benedictines also granted Francis the use of the Portiuncula church in perpetuity, and that Benedictine sisters gave shelter to St. Clare and her earliest followers.

The Benedictines, in other words, have long been involved in preserving and promoting the way of St. Francis, and it seems that such was the case with me. I’m grateful that, after all these years, I’ve made my way back to the spirituality of Assisi, and I’m happy to be reminded that it needn’t mean leaving St. Benedict behind. In fact, the two saints (and their spiritual descendants) seem very much at home with each other.
____________________________________

A version of this reflection appeared on Catholic Exchange. It was originally published in the June 2016 edition of Pace e Bene, the newsletter of the ImmaculateConception Fraternity of Secular Franciscans, Mishawaka, IN.
Posted by Rick Becker at 11:29 AM