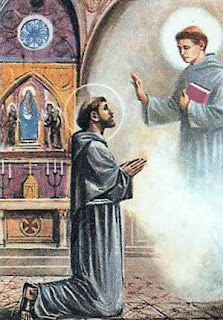 Around my house, we joke about “salvation by association” – our facetious hope that we might ride on the eternal coattails of the holy men and women we’ve rubbed shoulders with over the years. Of course, salvific grace doesn’t work that way, but hanging around saints is certainly a prudent measure when it comes to pursuing sanctity for ourselves.

Biographer of saints Father Alban Butler certainly thought so when it comes to Luke Belludi, a disciple and dedicated companion of Anthony of Padua. “The devotion to St. Anthony of Padua is so widespread and of such an early date,” wrote Butler, “that we cannot be surprised if those more intimately associated with him have been irradiated with his glory.”

In truth, we know little of Blessed Luke aside from his connections with his more famous mentor and friend. What we do know is that Belludi grew up in a wealthy family near Padua, Italy, and that he received the habit of the Friars Minor from St. Francis himself in 1220 – the same year, it turns out, that St. Anthony entered the order. Not long after, Bl. Luke is said to have implored St. Anthony’s miraculous intervention on behalf of a mortally ill child.

Later, St. Francis directed the rhetorically gifted Anthony to preach missions among the heretics of northern Italy and southern France. Bl. Luke accompanied Anthony on these journeys, and returned with him to Padua in 1231. That year, Anthony’s relentless pace caught up with his sickly constitution, and he succumbed to an early death. Luke Belludi was among the friars who attended Anthony in his last agony, and afterwards he became the saint’s stalwart champion.

Among other legacies, Belludi saw to the completion of the magnificent Paduan basilica in honor of St. Anthony, and it is there that Bl. Luke’s remains were put to rest in 1285 – in close proximity to the earthly remains of his saintly role model.

A version of this story originally appeared in Franciscan Way, Franciscan University of Steubenville.
Posted by Rick Becker at 11:01 AM