Pure Joy: An Open Letter to the Chelsea House Orchestra 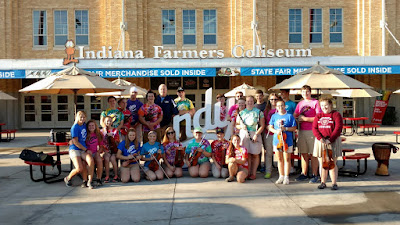 Where there is sadness, joy.
~ Prayer of St. Francis

A colleague of mine wrote a sermon on joy this summer. In preparation, he perused the theological landscape regarding the topic, and was surprised to find a dearth of relevant contemporary sources. Almost as a punctuation mark to his depressing discovery, his hunt led him to an ongoing study being conducted by Yale Divinity School (and funded by a large Templeton grant) meant to trace and explore the meaning of Christian joy in the modern context. The fact that this study was proposed at all, let alone generously endowed, is an arresting admission that there’s a paucity of hermeneutic source material on something so fundamental to human experience and yearning.

All I can say is: Too bad my friend didn’t have a chance to see you perform at the Indiana State Fair before he gave his sermon. He would have found inspiration aplenty.

My family and I did have the good fortune to see you in action this past Sunday. It was our first time venturing down to Indianapolis for the big Fair. As we wandered about, we made our way to the Pioneer Village to check out the exhibits and displays. That’s where I detected faint strains of Celtic music in the air, and I followed them to their source in the Opry House.

And there you were, some two dozen young musicians, mainly strings along with a handful of woodwinds and percussion, pouring out an irresistible riot of sound and celebration. You were all grinning and flush, perspiring in the heat, but still perpetually moving about on the stage. I was mesmerized, and when my children took seats toward the back of the assembled crowd, I compelled them to move up to the front row.

I wanted to drink in your performance straight up and undiluted by distance, for it was an intoxicating mix of music, motion, and magic that I’ve never encountered before.

There was so much evident happiness, so much exuberance, so much joy. Having performed in musical ensembles in my youth, I was aware that directors frequently instruct their charges to plaster smiles on their faces for the sake of the audience, but that was not the case with you. I know – I looked carefully. Each of you was bouncing and beaming, rows moving from back to front to back again, trading places as different performers were featured. Always there was a palatable sense that your visceral pleasure was authentic – your joy was so real! You were clearly enjoying your music, enjoying each other (director included), and enjoying simply having the opportunity share your collective gifts with an audience.

Of course, the music was superb on its own, but that was almost secondary to the elevated mood and transports of delight that your overall performance transmitted to your toe-tapping audience. We had to leave your Opry House appearance early, but later we stumbled across a group of you busking for change elsewhere at the Fair. “Thanks,” I muttered, dropping a buck in your open instrument case. It was all I could spare at that moment, but no matter. You responded with abundant smiles and nods, and your musical hilarity proceeded apace.

As I said, too bad my friend didn’t get a chance to see you before he preached. Indeed, I’d argue that your Fair performance itself constituted a kind of ersatz sermon – a lively musical explication of what it looks like to be fully given over to one's natural gifts which then leads to a gratuitous sharing of those gifts with others.

For more information about the Chelsea House Orchestra, follow this link to their website.
Posted by Rick Becker at 4:10 PM