Of Casablanca, Cinema, and Coming of Age 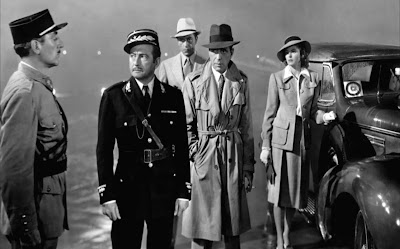 The fact is I am quite happy in a movie, even a bad movie.
~ Walker Percy


In college I thought I’d reached the height of cinematic sophistication when I went to see My Dinner with Andre (1981). My brother and I drove over to an art house in Seattle’s bohemian quarter and sat through the bewildering dialogue along with all the other aesthetes. It felt very grown up and intellectual to leave the theater in a quandary: What just happened? What was that all about? It was exciting and new – a hint of soul-searching maturation that went beyond mere textbooks and Bible studies. The film sparked questions that I didn’t know what to do with, and it seemed like a watershed moment – a revelation of sorts, an interior marker. We followed up the revelation with a visit to the art house’s coffee shop. We discussed big thoughts. We sipped our espressos. 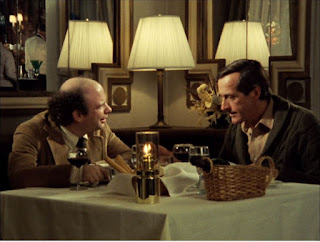 But I was wrong about the watershed stuff and the sophistication. The raw urgency I associate with watching My Dinner with Andre was fleeting, and probably more a reflection of my desire to be cool (like the bohemians) than anything authentic in my own interior flourishing. It certainly wasn't the film's fault; I simply wasn't ready for it. I returned to my dorm, and life went on as before. Andre didn’t inspire any grand gestures – no extravagant flights of fancy followed, nothing radical or outlandish. Just back to the books and ticking off more courses for my GPA and bachelor’s degree.

Then I graduated, moved down to Eugene, and commenced becoming an adult. I lived in a converted sorority with other adult wannabes, worked at a bookstore, and bummed around on my days and evenings off – often ending up in more bookstores. I had no TV, no electronics to distract me from my post-undergraduate melancholy. Instead, I read widely and wandered, both literally and intellectually. I fed my angst. I drank more coffee.

One night, I decided to go see Casablanca (1942) at the University of Oregon. I’d seen the flyer in the student center where I often read and hung out. I think admission was listed as 75 cents, and I made up my mind to go. It was a movie I’d always heard about, but somehow missed growing up.

It was early in the fall I’m pretty sure – maybe the screening was associated with freshman orientation – so it was warm, shirtsleeve weather. I strolled down to the student center, took my seat with the students in the stuffy auditorium, and settled in for the ride. I even bought popcorn.
There were no revelations in Casablanca, no new questions, nothing viscerally challenging. It was all romance and adventure mixed together in a confusing melodramatic narrative. I got the jilted lover bit, and I pretty much followed the suspense surrounding those transit papers signed by De Gaulle – a quasi-McGuffin of sorts – and the heroic Victor Laszlo's quest for freedom. 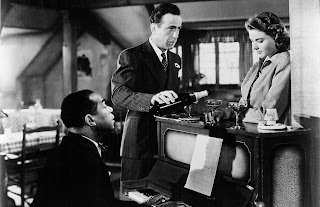 Plus, I enjoyed the snappy repartee between Bogart’s Rick and everyone else, especially Ilsa (Ingrid Bergman), and I recognized the classic lines that now pepper our common parlance – “Play it (again), Sam” and “Here’s looking at you, kid” and the rest.

I watched and munched.

After the closing credits, the lights came up and we all filed out. It was cooler out and quiet, and I walked home slowly along University Street, I wasn’t plagued by existential questions or pseudo-philosophical agonies. Instead, there was a prickly sensation of pleasure. It was the movie equivalent of reading Dostoevsky or Don Quixote because you feel like you should, and then actually enjoying it. I might’ve been motivated by a desire to fill a gap in my cultural formation, but I ended up reveling in it – a bonus!

Today I have a DVD copy of Casablanca at home, and not too long ago, Katharine, my 11-year-old, requested it on a family movie night – which meant that she’d already seen it at least once and she was choosing it over Princess Diaries and High School Musical II. With all the hubbub associated with the film’s 75th anniversary today, I was inspired to seek out Kath with a question: “What do you like about Casablanca?”

Me, too. It’s all of a piece, and it’s hard to tease out anything in particular that makes it so appealing. Casablanca is a story well told – no big thoughts, no propositional posturing. Like a painting or a poem, it inspires by means of images; like a good painting or poem, it bears revisiting over and over.

“Let’s watch it again,” I suggested to Kath in a Sam kinda’ way.

She didn’t hesitate. “Sure!”