St. Edmund Campion and the Advent of Advent 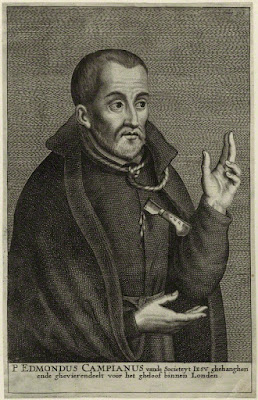 It’s the First Sunday of Advent – it’s finally here! But, in truth, it actually started late on Saturday.

That’s because, liturgically, Sunday always begins late on Saturday. It’s a ritual reckoning of the Sabbath – sunset to sunset – that we inherited from Judaism, and it’s why we celebrate Sunday Mass as early as Saturday afternoon.

It’s also why Sundays have two celebrations of Evening Prayer in the Liturgy of the Hours: First Vespers is prayed on Saturday in the p.m., and Second Vespers on Sunday itself. Thus, even when we don’t attend the Vigil Mass, our corporate Sunday observances are initiated by priests and religious (and laity) who intone Evening Prayer I the night before.

It’s also an appropriate bridge this year between Advent Sunday #1 and the day that precedes it – Saturday, December 1 – which marked the feast of the English Jesuit martyr, St. Edmund Campion (1540-1581), a true proclaimer to the nations.

Campion came of age during the English Reformation and his studies at Oxford led him to question the Crown’s usurpation of papal authority. At great risk, he threw away a career in the Church of England and traveled to Rome to pursue a Catholic vocation in the Society of Jesus.

After ordination, Campion taught for a time, but in 1580 he returned to his homeland to surreptitiously serve the persecuted Catholic minority. As a priest-outlaw, St. Edmund was always on the lam, and he regularly made use of disguises so that he could better minister to the faithful.

Betrayed by a spy and convicted of treason in 1581, Fr. Campion suffered a brutal martyrdom on Dec. 1. Yet that wasn’t the end of the story. Campion’s heroic efforts and courageous example helped the English Catholic Church survive its period of persecution, and it emerged intact and vibrant in the modern era.

A version of this meditation appeared on Catholic Exchange. It originally appeared in the Sunday bulletin of St. Joseph Catholic Church, Mishawaka, Indiana.
Posted by Rick Becker at 10:32 AM