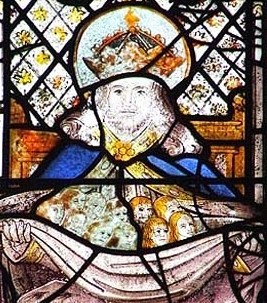 If you check Catholic Online for the saints of April, you’ll find this curious entry for today: “St. Brychan. King of Wales, undocumented but popular saint. Brychan is credited with having twenty-four children, all saints.”

So, we have a holy royal with no official pedigree, but an ostensible following – both in terms of fans as well as blessed progeny. It's a tantalizing hagiographic tidbit that invites further investigation.

The cloud that obscures the true biography of this acclaimed Celtic figure is virtually impenetrable, but his name sure is linked to all kinds of history and piety. The story goes that Brychan was an Irish prince that landed in South Wales as a youth after his family took charge of the kingdom of Garthmadrun – now known as Brycheiniog in honor of the saint. After his father’s death, Brychan inherited the mantle of leadership and was said to have developed into a godly and just ruler, as well as a firm supporter of the Church.

He was also a fierce opponent when threatened and tenacious in combat. It is said that a rival, King Gwynllyw, sought to wed Brychan’s beloved daughter, Gwladys, but that Brychan turned him down. After Princess Gwynllyw was kidnapped, a tremendous battle between the two monarchs ensued which required the intervention of King Arthur himself to produce a peace. St. Gwladys did go on to marry King Gwynllyw (also a saint), and, according to a 11th-century chronicle, their children included yet another holy personage, the abbot St. Cadoc.

And that’s the thing about Brychan’s legacy: It’s brimming with saints. They’re practically strewn about in Brychan’s story like plush occasional pillows in a redecorated living room – here, there, so many that you no longer notice them. It’s mainly his many saintly children, borne of his three (or four) successive marriages, not to mention his saintly grandchildren and on down the luminous line. There’s Ss. Adwen and Keyne, Wenna and Menefrida. Even his childhood tutor, Drichian, was known to have been a saint.

On the other hand, it’s also likely that some folks in the Middle Ages were inclined to associate their lineage with Brychan’s as a shortcut to pious respectability. So many, in fact, that although the number 24 (as quoted by Catholic Online) is the most commonly mentioned, there’s really no way of telling how many kids were sired by the king – 50? 60? Who knows?

Yet even that fudging of family trees is a backhanded compliment to the Brychan narrative, regardless of how accurate it is. It’s been said that “the apple doesn’t fall far from the tree,” and it appears that such was assumed to be the case with King Brychan – or at least his name. Why else would so many want to be in on his heritage? He might not be a canonized – or official – Saint, but Brychan certainly has left his mark of sanctity on the British Isles and beyond.

As befits a man associated with so much godliness, the annals tell that he eventually surrendered his crown to one of his sons and lived out his remaining years as a hermit. Although his April 6 commemoration might be unofficial, he can hardly be overlooked on all the feast days of his saintly descendants, both real and imagined.
__________________________

A version of this reflection appeared on Catholic Exchange.
Posted by Rick Becker at 11:10 PM