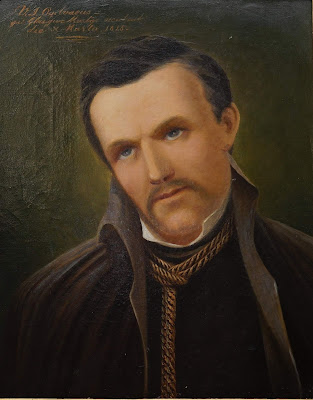 You gotta’ love a sense of humor on the scaffold.

Take St. Thomas More, for instance, who famously jested with his executioner. “My neck is very short,” said More from the chopping block. “Take heed, therefore, thou not strike awry for saving thine honesty.” Court records also note that “he bid the Executioner stay till he had put his Beard aside, for that had committed no Treason.”

Today is the memorial of another such saintly joker in extremis: St. John Ogilvie, S.J.

Born in Scotland, Ogilvie grew up in a devout Calvinist home. His education in continental Benedictine and Jesuit institutions afforded him broad exposure to the glories of the ancient Church, and he eventually was persuaded that Protestant critiques of Catholicism weren’t sound.

At age seventeen, Ogilvie became a Catholic, and he joined the Jesuits a few years later. He was ordained in 1610, and, after serving in various capacities on the continent for a few years, Ogilvie finally received permission to return to his homeland and surreptitiously minister to the persecuted Catholic minority there.

Fr. Ogilvie, disguised as a horse trader, arrived back in Scotland in 1613. He immediately began his underground service to the tiny Catholic flock around Glasgow, secretly saying Mass and administering the sacraments despite the threat of imprisonment and death. Just a year later, an informer, posing as a would-be convert, betrayed the Jesuit to the authorities. Ogilvie was arrested, tried, tortured, and sentenced to hang.

There’s a hint in the trial proceedings that Ogilvie held his precarious predicament lightly. When interrogated about his loyalty to King James as head of the English church, the Jesuit retorted that he’d no more acknowledge a king who played “runagate from God” than he would “this old hat.” Then, just before mounting the gallows, a clergyman asked him if he was afraid to die, Ogilvie shot back, “I fear death as much as you do your dinner.”

G.K. Chesterton observed that the “the martyr is noble, exactly because…he sets his heart outside himself.” Maybe it’s that selflessness, borne of a martyr’s total surrender of self to God, which also makes possible his mirth.