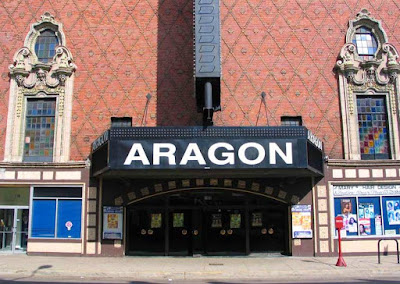 
Several years back, I took my two oldest girls to their first rock concert. At the time, Joan was a big fan of Janelle Monáe, and Meg liked Bruno Mars, so when we found out the two would be performing together in Chicago, I decided to spring for tickets. Besides, the venue was the Aragon Ballroom in Uptown, my former home – it was a cinch.

We made it to Chicago alright, and then parked at St. Thomas of Canterbury, my old parish. After a visit inside the church to show off where I’d become a Catholic a quarter century before, we walked the two blocks to the Aragon. Inside the tattered ballroom, it was festive and noisy – standing only, no seats. As the opening act, a local band, was warming up, Joan and Meg moved through the eclectic crowd closer to the stage. “We want to be up front,” they indicated – fine by me.

Then the band started playing – loud. “I think I’ll move a little further back,” I shouted to the girls. They nodded in time with the throbbing music, and I withdrew. When Monáe took the stage, I made signs to the girls that I was moving further back still, to the very edge of the crowd. And Bruno Mars? As he started his set, I removed myself as far back as I could go – to the back wall of the ballroom, behind the Miller Lite cart, next to a security guard. She must’ve seen the pain that lay behind my shrinking demeanor, for she pointed to her ears and mouthed, “Pretty loud.”

I slowly nodded, wide-eyed. “Where can I get some ear plugs?” I begged her. She smiled and pulled out a small packet from her pocket. “Here you go,” she said simply. God bless her – an angel of mercy.

As the clock inched toward midnight, my daughters and I made like Cinderella and hightailed it out of Uptown. They preferred to stay longer, but I wanted to be plenty alert for the long drive home to South Bend.

Wheeling along I-80 gave me time to reflect as the girls chatted about the evening's events. Clearly they had a good time, and that was the outing's main goal. My experience was considerably different, however, and it came down to two unanticipated object lessons:
With regards to Lesson #2: I'm recording this story here on the off-chance my security guard-savior will read it and recognize herself. If so, thanks again! If not, I sincerely hope to have the chance to reiterate my gratitude in Paradise someday...quietly.
_____________________________
Posted by Rick Becker at 2:57 PM