In the Wake of Parkland 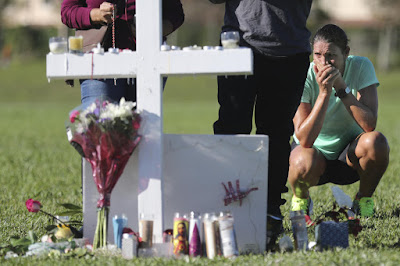 
Curious question, with no comment desired other than indicating your response. Debate is not welcome on this thread. What do you think is the primary reason for mass shootings in the US?

A. Gun availability and proliferation

B. Violence in entertainment

C. The breakdown of the family

Mike got scores of answers, if not hundreds (I stopped counting after a while), and they ranged all over the place, including many who wrote in some version of “All the above.” So did I – here it is:


Abortion, euthanasia, mercy killing, capital punishment, targeted killing, drone warfare. We're immersed in the culture of death, and we've all grown accustomed to solving problems by killing people. So, yes, all of the above (A, C, and D especially), but also a zeitgeist that implicitly condones destroying human life as an acceptable means to reach a variety of ends.

That was on Friday. On Saturday morning, I snagged my Wall Street Journal from the curb and located Peggy Noonan’s column: “The Parkland Massacre and the Air We Breathe.” In it, Noonan articulated and expanded on the same point I was trying to make in response to Mike’s question – a point the column’s sub-title succinctly summarizes: “What’s gone wrong with our culture that produces such atrocities? It’s a very long list.”

Noonan answers her own question with another question: “What has happened the past 40 years or so to produce a society so ill at ease with itself, so prone to violence?” Her list overlaps my own, and she adds some more: “The family blew up—divorce, unwed childbearing. Fatherless sons. Fatherless daughters, too. Poor children with no one to love them. The internet flourished. Porn proliferated. Drugs, legal and illegal.” Noonan speculates that all this cultural upheaval is responsible for a pervasive moral illness in our body politic. “A nation has an atmosphere. It has air it breathes in each day,” she writes. “America’s air looks clean but there are toxins in it, and they’re making the least defended and protected of us sick.”

What caught my attention, however, was the 40 year figure – why forty? A quick scout around the internet finds other retrospectives since Ash Wednesday’s horrific events in Florida utilizing a similar reckoning, more or less. Some go back to just 1999; others go back to the mid-1980s; few go back further than 1978 – that 40 year mark mentioned by Noonan. In fact, according to CNN, only two of the worst mass shootings in U.S. history occurred before then: Austin in 1966 and Camden in 1949.

Consider: Abortion on demand was legalized in this country following the Supreme Court’s Roe v. Wade decision in 1973. Since then, abortion on demand has become part of the fabric of our cultural consensus – that is, a medicalized form of killing has become a normalized means of addressing challenging human dilemmas.

So, without excluding questions of easy access to guns, lack of mental health resources, and the breakdown of traditional mores, here’s my own curious and honest inquiry: Could it be that we’ve just gotten used to killing as a way of life, especially since Roe v. Wade? Could it be that we’re raising one generation after another with that mindset?